My plan for my blog was to write about the tour one day at a time. After downloading almost 2000 pictures and realizing how much we did each day, I am presenting India in short mangable bites. I discovered by the end of my trip that India is a land of millions  and millions of little details,  each with its own significance. You will understand this when you see my pictures. India is a busy place where a lot has happened and is happening.

I mentioned in my first India blog post that I came to this country with an open mind and without doing too much research. This had some disadvantages but it may have saved me some anguish.  As we drove up to our first hotel, I saw that the whole place was a fenced-in compound with guards at the gate. In order to get into the hotel, my luggages and purse were scanned. I also was  further scanned by a female guard. The lovely hotel was part of the Taj chain. I then remembered the images from a news story in 2008 concerning an attack by Pakistani terrorists on another Taj hotel in Mumbai. The hotel was seized for three days  and 31 people were killed. I’m  glad I had forgotten about this. I would have made the trip anyway but the fact that I hadn’t recalled the incident had saved me from additional  pre trip nervousness.

I didn’t have time to think about this anymore because our tour group had a full day ahead of us. Our bright orange tour bus drove us through Delhi, the newer part  with its well laid out and landscaped streets designed by the architect, Edward Lutyens  for the British who colonized India from 1858 to 1947.

Then we went on to Jama Masjid, the largest mosque in India built between 1644 and 1658. Within in its walls its courtyard can accommodate up to 25,000 people. 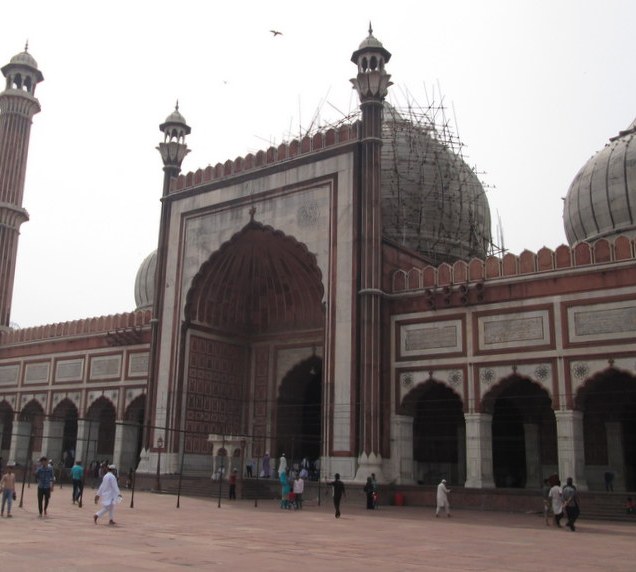 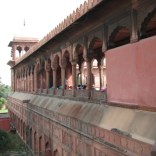 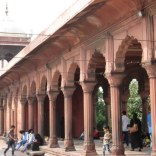 The  tour I was on was called “Mystical India” and I chose it deliberately because I wished to see first hand different kinds of religious practices. I have become more  interested learning about other spiritual paths as I  realize that good and evil have no affiliation, that there is good and bad in all groups, that there is good and bad in all of us.   Gandhi started,  “A variety of incidents in my life have conspired to bring me in close contact with people of many creeds and many communities, and my experience with all of them warrants the statement that I have known no distinction between relatives and strangers, countrymen and foreigners, white and colored, Hindus and Indians of other faiths, whether Musalmans, Parsis, Christians or Jews. I may say that my heart has been incapable of making any such distinctions.”  I find great value and comfort in Gandhi’s philosophy of inclusion.

Our next adventure was a rickshaw ride and a stroll through “Old” Delhi. I think my pictures speak for themselves.

It was only the beginning of that day.  There was plenty more to see and learn.

5 thoughts on “India-An Event Remembered, Old and New Delhi, and a Mosque”